GGP Media printed the German edition of Michelle Obama’s memoir “Becoming.” During the production phase, the strictest safety precautions were in force at the Pößneck site. In the U.S., the home market, printing was also handled by Bertelsmann Printing Group companies: Coral Graphics and Berryville Graphics. 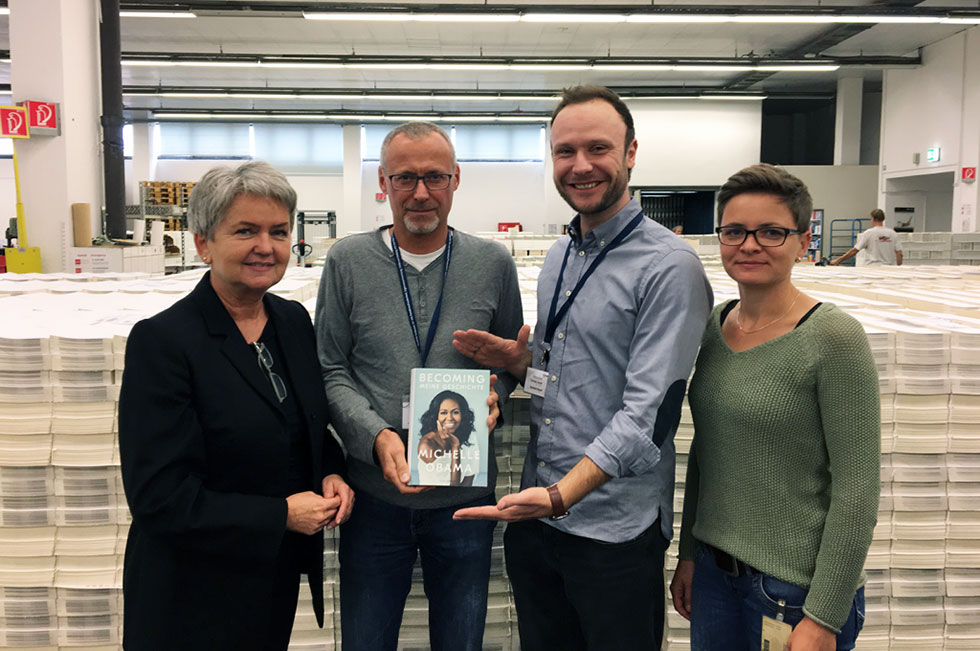 Looking forward to the release of the German edition of “Becoming” (from left): Heike Behrend, Key Account GGP, Stefan Hansen and Jacob Thomas from Goldmann, and Romy Lutz of GGP’s Customer Service department

Special projects require special measures – as GGP Media employees discovered earlier this year. The Bertelsmann Printing Group subsidiary made a decisive contribution to Michelle Obama's “Becoming” being available in Germany on time for the worldwide publication date. The GGP site in Pößneck, Thuringia, was assigned the task of producing the German edition of the eagerly awaited memoirs of the former First Lady of the United States with a print run of 200,000 copies. For the printing, the team worked closely with Goldmann Verlag, which is publishing the German edition. In the process, the team quickly realized that this would be anything but an ordinary print job.

Planning for the project began in February 2018 in coordination with Goldmann. Although the schedule was extremely tight, production had to start on time, the run had to go smoothly, and delivery had to be punctual. Although these conditions apply to many print jobs, in the case of the Obama book, extensive and diverse security requirements were added. Right from the start of production, the entire workforce was subject to a strict confidentiality obligation to ensure that neither passages nor photos from the book were leaked to the outside. The print data had to be processed offline and the standard measure of archiving it was suspended as the book was not allowed to appear in the GGP systems until the first day of sale. Printing plates, templates, and samples were stored in specially equipped security rooms.

And that wasn’t all. Separate security zones were established in GGP's production departments. As many as 18 additional security personnel ensured compliance with the regulations and conducted checks. External service providers were also required to comply with the higher security standards, for example when disposing of scrap material. Black privacy film was wrapped around the pallets with the finished copies to hide the consignment from prying eyes during transport. The loading platforms of the trucks that delivered the books were also secured with an additional seal.

Even the conveyance of the sample books to the client was conducted in an unconventional manner in this case. Instead of mailing them as usual, Stefan Hansen from Production and Goldmann editor Jacob Thomas travelled to Pößneck to receive them there personally. “The security measures for this book are among the most extensive in GGP's history,” says GGP Managing Director Christof Ludwig. “We can be very proud that we were entrusted with the production of this worldwide bestseller.”

Bertelsmann Printing Group companies were responsible for the printing of "Becoming" not only in Germany, but also in the U.S. home market. Coral Graphics, which specializes in book covers and jackets, produced the book jackets for the entire edition. Berryville Graphics printed large parts of the print run – other printers were involved in the production due to the high print run of the first edition. The U.S. companies in the Bertelsmann Printing Group have been producing for Penguin Random House US for many years. The existing framework agreement was renewed for another five years in 2018.